From The Ghost of Windsor
Jump to navigation Jump to search 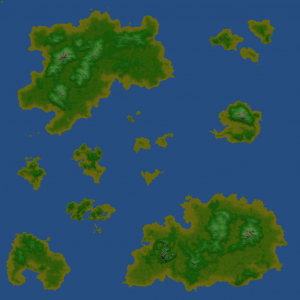 Currently under construction, the world map is going to be big. Very big.

The map is going to feature an ocean, with two large landmasses, and a lot of small to medium islands.

Each landmass is going to have a main city, which is essentially the capital of that landmass, and is also one of the two (initial) spawn locations for new players.

There will be many more cities throughout the game, but players will start in one of the two capitals. Think of them as Ultima Online's "Britain", except one for every landmass.

In fact, the UO analogy goes further. In Ultima Onlne's classic map, you pretty much had one landmass and several islands. Our map has a similar structure, except with two large landmasses.

The idea of having a large game world is exciting, but also poses certain challenges. While it allows players to explore a large realistic world, it may also rob them of player interaction. If you have to travel for a long time before you even run into another player, the game may end up feeling kind of empty - a pretty big problem for an MMORPG.

The solution is simple: everything is centered around the two main cities. Dungeons, mines, areas of interest - all can pretty much exist in close proximity to starting cities, allowing player to pretty much hang around a smaller area, never needing to go too far.

But then, why build a huge world in the first place?

The point is that even in the real life, population distribution is very uneven. Huge empty forests and deserts, with no human settlements for hundreds, and even thousands of miles, while most people live in relatively densely populated cities. The idea is to create something similar. A few population centers where 80% of people will spend 80% of their time, while still retaining that option of traveling far, discovering new places, and finding new resources/items/creatures.

As of this writing, I'm working on the world map itself. I already created the height maps in World Machine, and currently I am populating the world itself.

The map shown on the right is just the export from World Machine. While most of the features are going to remain the same, there will be lots of additions.

There will be different bios. A desert area down south is planned, while the three islands on the top right are going to be permanently snowy. There will be snowy areas in other places too.

There will be lots of towns, and many more natural features not present in the WM export such as rivers and lakes.

The map itself is 80x80km which is very large. You may see a bigger version of the map picture with a grid. Each square in the grid is 5x5km.